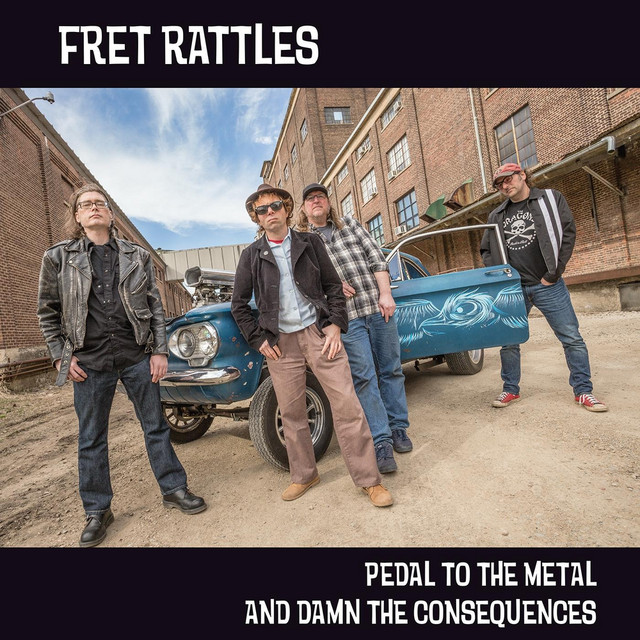 Rawk week!  We'll get to some Country and other stuff soon.  But, this is Rawk week.  Behold.

What the fuck is rawk?  Isn't it just rock with a funny spelling?  Nah. rawk is a state of mind, and a sound that is raw and a little nastier. The Stooges, Rolling Stones, Replacements, Oblivians and The Runaways were rawk, AC/DC, The Beatles, REM, Pearl Jam, and Heart are, well, rock.  There's a longer piece to be written, with more obscure examples and tons of explication, But we'll save that for our book.

What we really care about is the new Fret Rattles rekkid, Pedal to the Metal and Damn the Consequences!

A buzzing, Deeetroit via Minneapolis slab of high octane scuzz, unrelenting greased up rawk, ratchet fried and oil splattered, this aint for the faint of heart. Land speed records set (only one song clocking in over four minutes, the rest at an appropriate 2-3 minute burning trashcan explosion), you can feel the peel-out skid marks on yr parent's lawn, taking Deadman's curve down the road to fiery hell, bustedbentblackened guardrails a testament to Saturday night gone terribly, wonderfully wrong.

You can grab a couple of songs here for free (but hey, give 'em some money...they worked hard for it..)

You can buy the digital rekkid here (minus two extra tracks available on the LP).  Or you can buy the actual long player at these rekkid stores (many with online stores).

Check out the following video to lead you into salvation...

Posted by Brian K Reese at 9:00 AM No comments: 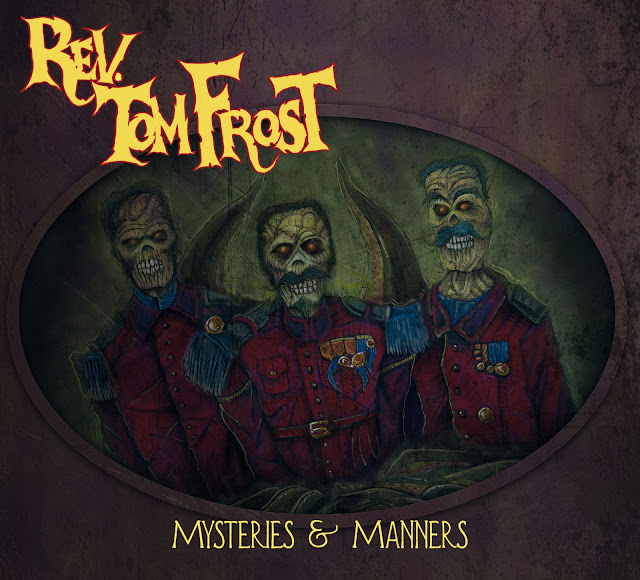 The good and right Rev. Tom Frost has been shaking chains, exorcising demons, and shaking bogeymen loose for years, and over numerous albums and projects.  Each of these albums have served a carnival ride ticket into the darker corners of a world both natural and supernatural, stomping affairs filled with western noir, exploitation sleaze, Waitsian holler, riddim'n'booze, and sanctified holy roller baptism. He's about to release his best rekkid yet.

Kicking off with Dorsey Burnette's Tall Oak Trees, with its resonator geetar and phlegm soaked guttural vocal, the lyric (And then along came the devil/Up out of the ground/He tempted the woman/And that spread sin all around) sets the stage and Frost hollers maniacally over the top, surging the trope and claiming it into a throbbing revival meeting.

Things spiral even further into Dante's purgatorio from there: The Dark Road bashes into a frenzy; Thunder and I rides a harmonica groove into Route 666, pickup truck spinning on brimstone road; Trashcan slings a greasy blues workout blessed by Santa Muerte; Golden Days, Red Hot Night sears mariachi seared into the very flames of hell. Frost's take on Hey Brother, Pour the Wine, most famously done by his lordship, Sir Dean Martin, visits a mafioso party turned sangria bloody, and Frankie Laine's That Lucky Old Sun is a barrelhouse rollicker,  rollin' 'round heaven all day.

Rev. Frost plays almost all the instruments on this rekkid, ably assisted by Dr. Fredaz on Sax and Trumpet.  His voice is a crunched gravel Pentecostal preacher, testifyin' in tongues and lust, salvation and sleaze,  full of stomping, sin-fueled rave-up, soul sold twistin' hallelujah, hay-baled scuzz, Satan-blessed nightmare, you wake in a terror sweat, fumbling for the dial, radio tuned into crackly transmission from the blessed damned, all-night DJ spinning the soundtrack for the end of days, the jukejoint full of skeletons rattling sacred bones into dust, the pork pie pianist with burning fingers laughing in flames, unchained ghosts dancing about the shimmy wobble, sing Glory! Glory!

The rekkid, Mysteries and Manners, comes out September 30th. One of thee very best records of the year!  For more info, and to pre-order, go here.

Until then, listen to this:

A Treatise on My Fealty to Canada's Doug and The Slugs


I put together a selection of my favorite songs by these fellows, and you may listen to it HERE. After you've enjoyed the songs, how about giving them some money and getting more Doug and The Slugs in return? Go HERE. 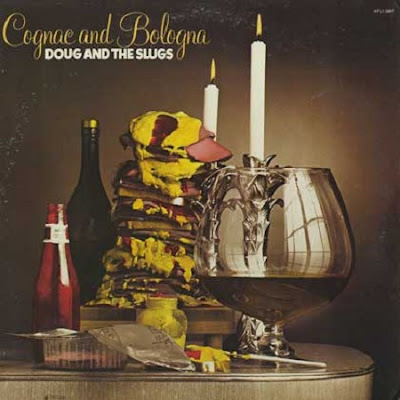 .......
It's a damn shame Doug and The Slugs were never bigger in the states, or anywhere else...but Canada.

Formed in 1977 by the brilliant-and-not-just-for-a-Canadian-newspaper editor/cartoonist Doug Bennett, in Vancouver, Canada, Doug and The Slugs was an antediluvian big-band romance and sardonic boogie band, with the heart of an alt-Manilow, and blahblahblah something to do with W. Somerset Maugham.

Their first album, titled Cognac and Bologna, was released in 1980. Paid for by a second mortgage on their managers home, it yielded hits in the top 20 and 75 in Canada, zilch of course, in The States. But, my apartment back in those heady '80s days, in spite of my deep abiding love, my abiding love for early Costello, Doug and The Slugs often rivaled Costello and Joe Jackson, both lyrically and musically. Hell, they could have kicked the ass of Huey Lewis AND The News, but for their Canadianess.

The Slugs' songs were hooky as hell, clever, witty, sharp, a little too smart, and often quite poignant, but for some reason in spite of a top twenty album that sold over 100,000 albums in Canada their mix of R & B, ska, and often archaic in pop forms, Doug and The Slugs barely crossed over here in the U.S. I suppose it's because I lived in the Pacific Northwest, closer to the well-spring of Vancouver, British Columbia.

Unless you live close to Canada, you'll rarely have heard Canadian bands, beyond Neil and Geddy. That's nothing new for Canadian bands. Considering the Canadian sense of humour for band names- Doug and The Slugs, The Tragically Hip, Bryan Adams, Geddy, Neil...it can't be easy. Perhaps the songs were a little too witty for yanks. Like Canadian Bacon.

They did score the theme for comedian and fellow Canuck Norm MacDonald's short lived tv show, and there's nothing wrong with that.

Doug and The Slugs has always been my happily and occasionally heartbroken little secret. Nobody knows about 'em and nobody knows I like 'em. Except, my wife, who hates them. And now you.

The Slugs released six albums, not including a hits package and Doug's solo stuff, and all but the first album and a "Hits" package are long out of print in the U.S.

Doug Bennett passed on in 2004, the victim of a bad heart and a worse liver at age fifty-three. He left behind a fine, intelligent, thoughtful, and most of all a witty and fun musical legacy. Hail Canada! This American bows to your gift.

Email ThisBlogThis!Share to TwitterShare to FacebookShare to Pinterest
Labels: Canada, Cognac and Bologna, Doug and The Slugs, Doug Bennett, Music for The Hard of Thinking, Norm MacDonald 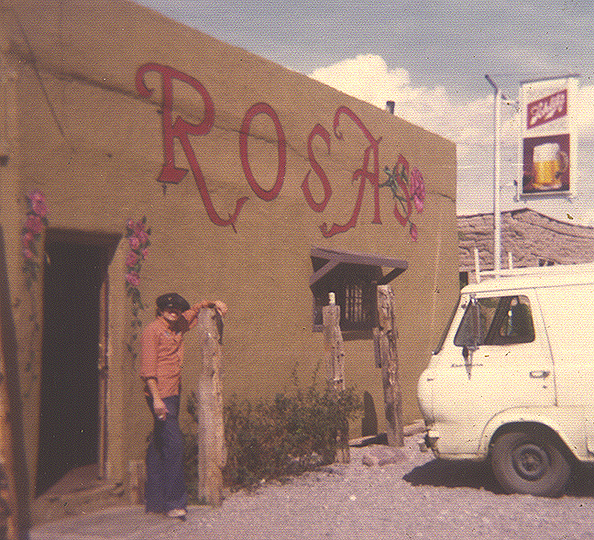 The "answer" song, formerly popular in the Blues and Country genres, and now well-hashed in Hip Hop, has a long history, and there are many obscure tunes in the genre that aren't documented in the above link or in any kind of ordered scholarship.  This is the first in a sporadic series where we'll address some of these hidden gems of history.

And we'll start with what has to be the most meta of answer songs, a strange moment when an artist answers their own rather legendary tune.

Marty Robbin's El Paso, released in 1959, is a monster.  One of thee great burnt desert songs, a tale of loss, murder and regret, wide open spaces cactus prickled and epic.

You know the song.  It's imprinted in you. It should be.

In 1976, Robbins released the song El Paso City, in which the protagonist is flying over the city of El Paso, and, get this, he remembers a song called El Paso. Think about it for a minute.  Full of nimble guitar work, a killer Mariachi note, and a melody reminiscent of the original, the narrator relives the narrative of the original song, placing themselves into the very situation that occurred in the original, only from a remove, in the sky, over the scene of the crime, a viewer above.  He imagines himself in the situation ("Could it be that I could be/The cowboy in this mystery/That died there in that desert sand so long ago"), and becomes, in his mind, the very thing he is reacting to. Robbins is singing a song in which he references the singer of the song he had previously sung ("I don't recall who sang the song..."). Nicely done.

So...meta.  Weird and wonderful.  Two great songs that link in perverse and obvious connection, responding to themselves in a cycle that gallops a sand blasted sunset of a lost time and a world removed.